Nintex tech chief: The time for automation in retail is now 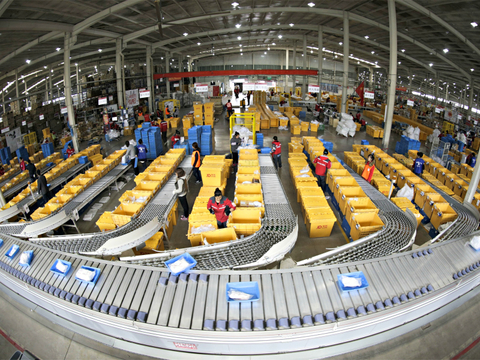 Warehouses, big and small, will need to automate in order to survive. (Image: JD.com)

Uber recently announced that it's testing robotic-driven trucks, and they've even made it down the highways in Arizona. The announcement comes just weeks after Amazon announced Shipping With Amazon, an automated form of operations that puts pressure on delivery services such as  FedEx and UPS.

As these big names continue to automate aspects of delivery and logistics, traditional carriers will need to catch up or suffer big losses, according to Ryan Duguid, SVP of technology strategy at Nintex.

Feeling the pressure in the past year, players in the logistics industry have worked to streamline operations and automate whatever functions possible to be more efficient and competitive. Duguid gives as an example Walmart's acquisition of Parcel in order to make same-day deliveries in New York, and Amazon's acquisition of Whole Foods.

In addition, he notes that robots and artificial intelligence are picking up steam and supplementing human labor in warehouses.

In the same vein, there are few major technology or logistics providers who do not have an autonomous truck strategy in place," Duguid told FierceRetail.

The announcements by Uber and Amazon have sent waves of excitement in the industry, but it will be some time before retail can measure their success as they are both still in the early stages.

"That said, these developments are progressing quickly given their complexity. Supply chain and logistics functions are more challenging to automate due to factors like regulation, unpredictably and the number of parties involved. Despite its challenges, the benefit of automating as many logistics processes as possible cannot be doubted, and we’re seeing companies put immense effort into doing so," he said.

So where does this leave providers such as FedEx and UPS?

As pressure comes down from Amazon and Uber, the providers with the most seamless,convenient and inexpensive delivery will ultimately win. Duguid says that for traditional carriers like FedEx and UPS, they will need to invest in data optimization and predictive analytics in order to keep pace with technology-first services.

"For the most part, only distributors with automation in place will be able to drive down costs to the level of Amazon and Uber," he said. "Instead of causing panic, these announcements from players like Uber or Amazon should act as a catalyst to automate as many processes as possible to cut inefficiencies."

Automation is also having an affect on what's happening on the manufacturing plant floor. Duguid says that the current strategy for most manufacturing plants is to employ a large number of workers on contract on an order basis. The problem with this system, he notes, is that contractors can claim completed work they have not done.

"To keep distribution efficient and cost effective, manufacturers can implement a mobile workflow platform," he said. "Contractors can then receive orders via their cell phone where they would also enter information once the job is completed, even attaching photos of their work. Not only does this allow little room to cheat, it also automatically updates the ERP. Manufacturers who implement a similar system will see higher compliance rates, time saved from eliminating paper forms, and a system that is more accurate and up-to-date. Human error itself can be pricey, and automation can remove that from the equation."

Duguid says there is still a chance for smaller logistics providers to initiate improved business processes with minimal lag time when bigger players struggle to change legacy models, in other words, get ahead in the game. While smaller players do not have large staffs and maximum resources, they often realize their limitations and therefore, turn to automation to help them stay competitive.

"Customers anticipate the same rate of service from any logistics service, regardless of its size. It’s crucial that smaller brands then streamline their internal processes as well as identify supply chain partners that take a similar approach and can help propel the brand forward," he said.

So for companies that are ready for automation, the best place to start it to analyze and recognize paints points that are keeping the process from running smoothly. Duguid says this includes highly repetitive tasks, redundant data entry or places where information becomes lost. And once a business determines which processes need the most improvement, they can determine what tools are appropriate for the projects they need to take on.

"A workflow platform like Nintex can tie together a number of processes like manufacturing, distribution and transportation to automate linkages, delivery management and other processes," he added.