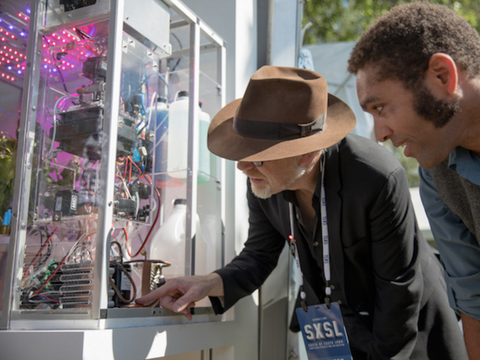 Target is looking to grow vertically by testing a new agricultural technique that grows produce in vertical gardens that can be harvested in stores.

In January, the retailer announced an investment in the Food + Future coLAB – a collaboration with the MIT Media Lab and Ideo – and has been exploring new technology to create better fresh food departments in Target stores.

One such program has created vertical farming that would allow shoppers access to fresh produce grown and harvested right there in the store.

Tests could begin in spring 2017, according to Greg Shewmaker, one of Target’s entrepreneurs-in-residence at the coLAB.

Shewmaker, along with chief innovation and strategy officer Casey Carl, showed off the project at the South by South Lawn (SXSL) festival in Washington, D.C., on the South Lawn of the White House.

The team is hoping to find out just how much consumers want to interact with their food and expand beyond the leafy greens currently produced by vertical farms, including some grown from ancient seeds obtained by MIT.

Grocery is one category that Target continues to struggle with, and new initiatives such as this one are part of its plan to differentiate the department and reduce operational expenses related to fresh foods.

“Food is a big part of our current portfolio today at Target – it does $20 billion of business for us,” Carl told Business Insider. “We need to be able to see more effectively around corners in terms of where is the overall food and agriculture industries going domestically and globally.”