Scan and Go vs. Amazon Go: Round 1 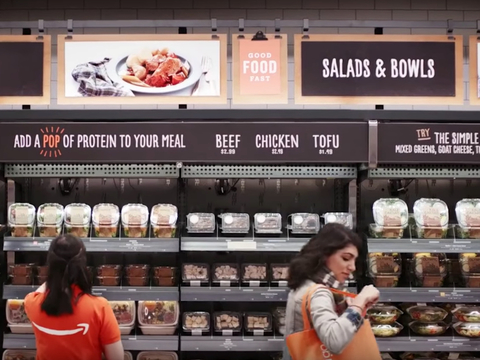 Can Walmart's Scan and Go app keep it ahead of Amazon in the online grocery war?

Earlier this month, Walmart expanded the rollout of its Scan and Go technology, which lets customers scan products’ barcodes through a smartphone app and add items to their carts. The move is just another important step taken by the big-box retailer in an effort to compete aggressively against Amazon.

Not coincidentally, Amazon has been testing Amazon Go, a checkout-free shopping experience conducted through the mobile app. But can Walmart's new grocery concept actually measure up to the marketplace of all marketplaces—Amazon?

Currently, both concepts are in the very early phases, and whereas Amazon’s is thus far only being tested on employees, Scan and Go is open to the general public.

According to Matt Sargent, senior vice president of retail at Magid, a research-based consultancy, the two downsides of the Walmart solution are: first, a customer must manually scan each product, whereas in Amazon Go, the product is automatically "sensed" when placed in the basket with RFIC. Second, a customer still has to "check out" with the store greeter by showing him a digital receipt, but with Amazon Go, there is no need for the final "check.”

“Despite these downsides, as already noted, Walmart should be applauded for actually putting this into motion with real customers versus how Amazon is testing Amazon Go,” Sargent said. "They are already ahead, as Amazon is very small in grocery today, but this will allow Walmart a better chance of holding onto its leadership position."

And consumers seemed eager to test out the concept. Sixty-one percent of Whole Foods customers, 56% of Target customers, 54% of Kroger customers and 44% of Costco customers said they were somewhat likely or very likely to shop at a store like Amazon Go.

RELATED: Amazon planning for technology, not staff, to run grocery

Looking toward the future, Sargent says that retailers that give consumers both a breadth of offerings and ease of use will ultimately be the winners in the technology race for groceries.

As for the question of whether Amazon will ultimately conquer the grocery category, as it has so many others? Sargent is not totally convinced.

"There are many road blocks to grocery that will make this category harder for Amazon to conquer.  I don't think they will dominate, but I think they can be a significant tier one player," he told FierceRetail.