Retail jobs at risk in the face of automation 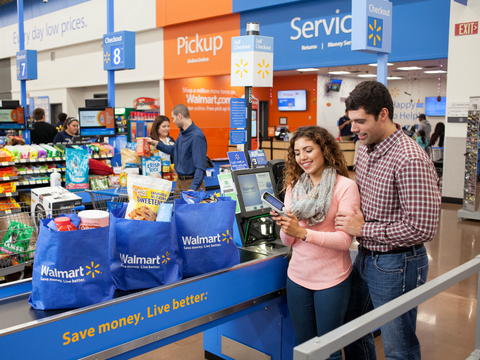 Cashiers are the most likely to have their job affected by automation. (Walmart)

Nearly 16 million people work in retail in the U.S., and it’s estimated that almost half could lose their jobs to robots over the next 10 years. Specifically, a new study shows that 7.5 million retail jobs are expected to become automated, and cashiers are the most likely to be affected.

However, technology is not sophisticated enough to take over positions that require high levels of customer interaction.

FierceRetail spoke with Allison Wallrapp, an attorney with Constangy, Brooks, Smith & Prophete, LLP, to gain more insight into the realities of automation for retail workers.

Allison Wallrapp (AW): Ultimately, technology and automation will reduce the number of employees necessary in the retail industry. We are already seeing robots and other technological advances reduce the need for certain positions. Given these advancements, coupled with pressures on the industry, we expect to see the retail job force decline in the coming years.

FR: Does automation also have the potential to create some jobs?

AW: We may see the creation of new analyst positions to determine whether jobs can be automated and if doing so is feasible, efficient and financially worthwhile. These positions may also include studying how consumers react to the technological changes and what exactly they are seeking from their in-store experiences.

FR: Which jobs will be most affected by automation?

AW: We are already seeing declines in the need for positions such as cashiers, stock clerks and store accountants. For example, Walmart has rolled out Cash360 machines across nearly all of its stores. These machines count eight bills per second and 3,000 coins a minute, and then digitally deposit money at the bank. The Cash360 machines are taking over the work of Walmart’s store accountants, who were responsible for counting cash and tracking the accuracy of a store’s books. While some of these former store accountants have been shifted into other jobs at Walmart, more than 500 people who held these positions have left the company.

FR: Which jobs will be secure?

AW: Jobs that will be most secure will be those that involve a high level of customer interaction. The current technology is not sophisticated enough to take over these positions, so individuals whose positions are customer-facing and more service-focused will be better able to weather these changes in the industry.

FR: So what are some of the possible legal ramifications that go along with automation?

AW: There is the possibility of new regulations being implemented regarding the use of automation in the retail sector. Additionally, as the use of automation percolates down to smaller employers, a reduction in their workforce could mean that the remaining employees are no longer covered by Title VII (which prohibits employers from discriminating against employees on the basis of sex, race, color, national origin and religion) or the Family and Medical Leave Act (which entitles eligible employees of covered employers to take unpaid, job-protected leave for specified family and medical reasons).

FR: How important is customer interaction in 2017 and how important will it be in the future?

AW: With so much shopping shifting online and so many other changes happening in the industry, the way retailers interact with customers has evolved markedly in the past few years. Digital interactions, including engaging with customers on social media and via mobile applications, are allowing retailers to continue conversations with customers long after they have left the store or start ones if a customer has never stepped foot in one of their brick-and-mortar locations. However, as far as in-store interaction, savvy retailers know that customers will be seeking out that which they cannot get online—one-on-one service from well-trained human associates and immediate access to goods.

FR: What should retailers keep in mind as they prepare their workforce and technology for the future of retail?

AW: Retailers should keep in mind that technology can eliminate or reduce the need for employees to perform mundane tasks, which can allow associates to create a more personalized shopping experience for consumers. They should look to see how technology is able to facilitate or enhance a human connection in their physical stores and provide training to their associates in order to maximize this. Additionally, retailers should remember to keep the concept of “digital parity,” which is the consumer’s desire for an in-store shopping experience that is as convenient and seamless as what they can find online, at the forefront of their minds when providing training and creating incentives for their employees.