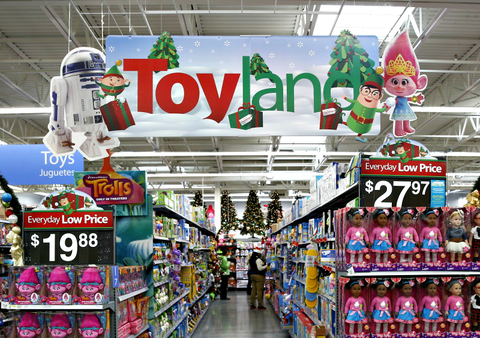 While much of the focus in retail is on digital – online sales could reach parity with stores this year – Walmart is taking advantage of its store network to drive shoppers to brick-and-mortar locations.

Walmart laid it out its holiday plans last week and a big part is to make stores more sociable and interactive.

There will be a small army of helpers unleashed in stores to speed up checkout, along with a new managerial position for oversight.

The number of product demonstrations will double this season to 150,000 and selfie booths will be set up in stores so shoppers can take seasonal photos with visiting Santas.

An increased emphasis on in-store pickup includes more dedicated locations to do so and added staff. The number of products being made available to buy online and pickup in stores will increase from 8 million to 20 million.

Pick-up counters are being repainted in bright orange for increased visibility, and the company is even experimenting with new kiosk technology to better deliver packages.

There will be a greater focus on exclusivity and value as Walmart backs away from discounting, at least as part of the advance plan. Things often change as the season progresses and sales fail to meet projections.

But one big takeaway from Walmart's seasonal playbook is that it wants stores to matter.