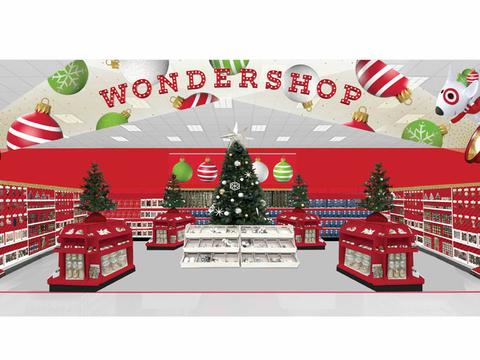 Target has sweeping holiday plans that include new shopping experiences, a seasonal "Wondershop," exclusive merchandise in every product category and even a holiday musical called The Toycracker.

Close to 60 percent of the retailer's holiday messaging will focus on value, according to Forbes. “Communicating value is critical to winning the season,” Rick Gomez, senior VP of marketing, said during a preview event in New York. There will be rotating deals and free shipping offers, as well as a return of 2015's "10 Days of Deals."

There will be rotating discounts focused on a new product category each week to keep shoppers coming back, with deals of $10 off a $50 purchase beginning in November and $25 off a $100 purchase in December.

In-store pickup remains a juggernaut for Target, which expects close to 35 percent of online orders to be claimed at stores.

Also new for 2016 is the Target Wonderlist, a list of gift recommendations culled from 400 products and offered as suggestions by personality types and interests.

As part of the holiday assortment Target will offer 1,000 new pieces from its Cat & Jack line, more than 1,800 new or exclusive toys (15 percent more than last year), exclusive board games and other licensed merchandise.

Target has been making inroads in the smart home category and is promoting pertinent products including virtual reality. Electronics departments at 1,500 stores will now have Target Tech reps to help shoppers with products.

But the biggest promotion of all will likely be Target's new musical, The Toycracker, a new version of the holiday classic The Nutcracker.

RELATED: Target to add some posh with Victoria Beckham partnership

The eight-minute musical stars John Legend and Chrissy Teigen and will air in two segments during the network broadcast premiere of Disney’s Frozen on ABC on Sunday, Dec. 11.