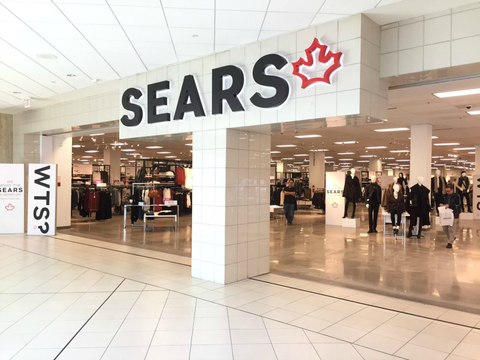 Sears Canada is testing out a new logo and store format. The flailing department store chain is hoping that the new look will help years of declining sales and turbulence from executive changes.

The latest revamp was the brand's store in the Promenade Mall in north Toronto. The new floor plan includes no physical dividers between departments so that shoppers can see across the 75,000-sq.-ft. retail space.

The new format is also aimed at giving the brand a platform for testing new ideas quickly. "It just feels lighter. We can change the configuration of the store regularly so that it is new and exciting for the customer…in the old stores, everything was very hard to modify," Becky Penrice, COO at Sears Canada, told the Financial Post.

Permanent displays are now on black metal fixtures with wheels, so merchandise can be easily moved, and the carpet was removed to reveal a polished, concrete floor. In addition, footwear has moved from the perimeter to the center of the store with all sizes available under the displays for shoppers to access. This move not only makes consumers happy, it will save the company money on associates.

The new Canadian format will roll out in three more Toronto-area stores before Christmas.

After an onslaught of executive changes for Sears Canada in 2014 and 2015, executive VP and CFO E.J. Bird stepped down in April 2016.

Sears Canada announced in 2014 that it would cut 1,600 jobs and is the midst of a three-year turnaround plan. In that same year, U.S. owner Edward Lampert tried to sell off stakes in Sears Canada in order to raise funds, and he eventually had to loan Sears $300 million from his own hedge fund.