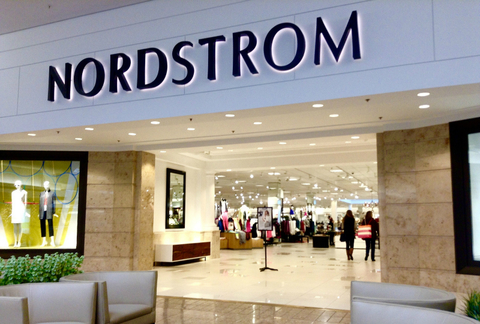 Nordstrom was the favorite premium fashion retailer among 10,000 shoppers, according to an annual fashion retail study conducted by Market Force. Nike also took a top spot for footwear in the survey, and Macy's topped for e-commerce purchases.

This marked Nordstrom's sixth year in a row as the voted favorite retailer, with 56%, and Lane Bryant came in second, up 7% to 52% in popularity from last year. Third place was a three-way tie: Dillard's, Kohl's and Forever21 at 46%. JCPenney came in fourth, followed in order by Macy's, H&M, Banana Republic and Old Navy.

The study also looked at what attributes consumers are looking for in a fashion retailer. Kohl's ranked first for its loyalty card program, as well as for delivering high value for its prices. Lane Bryant, Nordstrom and Dillard's were at the bottom of the list for high value for the price.

Best merchandise selection, atmosphere and checkout speeds went to Nordstrom. But Lane Bryant was the leader for the ability to create and look and for ease of finding items.

When it came to sales support, just 43% of shoppers said they were helped by a sales associate and only 38% received suggestions for items that fit their needs. Customers were most often assisted at Lane Bryant and Nordstrom and assisted the least at Kohl's and Old Navy.

“Retailers spend good money to market, promote and advertise their brands to lure shoppers into their door, but if their front-line representatives are failing to engage customers and deliver on the brand promise and fundamental customer service basics, they could easily lose that sale to their competitor next door,” said Brad Christian, chief customer officer for Market Force. “Our research shows that just 54% of shoppers felt the associate fully understood their needs, which underlines the need to consistently train and assess associates to ensure they’re executing on best practice sales processes.”

And interacting with associates online is growing in importance as well. Market Force found that 75% of shoppers interact with their favorite fashion retailer online, a 103% increase over the previous year.

The e-commerce sites most visited in the past 90 days included Nordstrom's, Lane Bryant's and Kohl's, but the most online purchases were made from Macy's, followed by Forever21 and Kohl's.

And despite the online growth, consumers are still hitting the physical stores for fashion. According to the survey, 76% have shopped at one of their favorite retailers’ physical stores at least once in the past 90 days, and 48% shopped there at least three times.