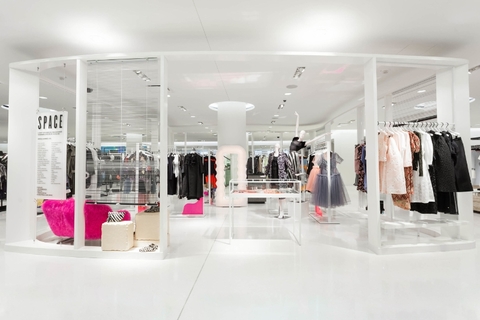 Nordstrom is expanding its Space boutique, doubling the number of locations for the curated collection of emerging designers.

Space was introduced in fall 2015 by Nordstrom VP of creative projects, Olivia Kim. It features collections by emerging designers such as Simone Rocha and Comme des Garcons Collection. It was initially housed only at flagship locations but will expand to four additional stores.

On August 24, Space will open at The Mall at Green Hills in Nashville, Tennesee, followed by The Grove in Los Angeles on August 26. Nordstrom will open its first Toronto store on September 16 at Eaton Centre, followed by Yorkdale Centre on October 21. Both will debut with Space.

In honor of the new Canadian locations, Kim and the Creative Projects team created a special capsule collection of exclusive ready-to-wear and accessory items from several Canadian designers. This capsule collection will be available in-store only at Space Vancouver and Toronto.

Nordstrom, like many luxury retailers, has struggled with declining sales in recent quarters. Profits plunged 64 percent in the first quarter this year.

The focus has been on growing off-price and outlet stores, and Nordstrom is no exception, pinning growth prospects its Rack division. The new Space boutiques mark a rare expansion of higher-priced merchandise.