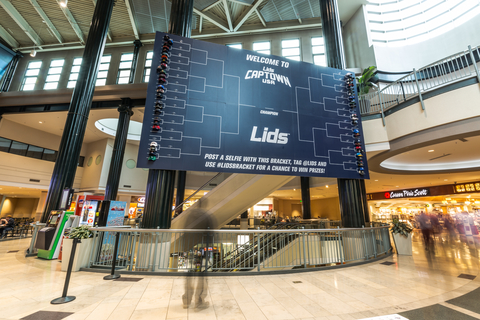 The three-dimensional hat bracket is 26 feet by 16 feet and stands in the Simon's Circle Centre Mall.

In the spirit of March Madness, headwear retailer Lids has installed a giant hat bracket in a mall near its Indianapolis headquarters—also known as Captown, USA.

As North American's largest headwear retailer, Lids has fittingly used hats to represent all teams participating in college basketball's NCAA tournament. The three-dimensional hat bracket is 26 feet by 16 feet and stands in the Simon's Circle Centre Mall. The brackets will be updated in real time as the tournament proceeds.

"The massive hat bracket is our fun, brand-appropriate way of welcoming visitors to Captown," John DeWaal, vice president of marketing, Lids Sports Group, told FierceRetail. "We will continue to capitalize on iconic moments in sports that help our brand reside at the intersection of fandom and fashion."

Simon's Circle Centre Mall was chosen because it is one of the largest shopping centers in Indianapolis and is central to downtown. The city was also the host for the first round of the college basketball tournament last week, hosting eight of the 64 teams and their fans. Lids also has a physical store location within the mall.

"We are promoting the hat bracket across all our social media channels," DeWaal said. "There is also a social contesting component for fans who post selfies in front of the bracket with the hashtag #LIDSBRACKET.”

LIDS has more than 1,300 stores across the country and online. The company recently declared Indianapolis as Captown, USA, with the opening of its new $20 million national headquarters. The 150,000-sq.-ft. facility has more than 400 employees.

Lids has been headquartered in central Indiana since Glen Campbell's co-founding of Hat World in 1995. The new headquarters has been in operation since Q1 2016 and its meant to be an ideal environment for employees to embody the company's "have fun, sell hats" mission. The space is equipped with a social media command center, around the clock sports coverage, a full basketball court and more.

“We are very focused on the continual improvement of our omnichannel business while always working to make our brand more digital, loyal and social," DeWaal said.