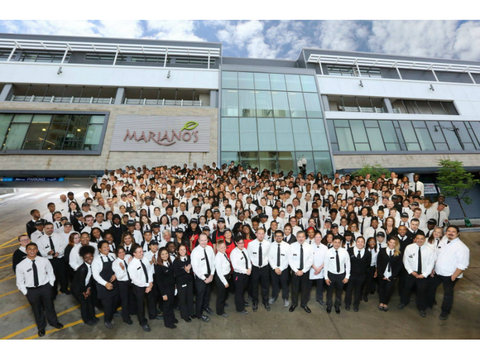 Kroger-owned Mariano's has opened a new store in Chicago, and the concept combines fresh, local, prepared foods and retailtainment into a new format.

The second floor features an expanded assortment of produce, a charcuterie and cheese shop.

This location expands the existing Mariano's brand promise and selection in a neighborhood filled with millennials, young families and singles. It's just a couple of blocks east of Wrigley Field.

Mariano's is part of Roundy's, which Kroger acquired in November for $800 million. The upscale concept was the brainchild of Bob Mariano, who retired last week. He described the store as a "true 'grocerant' experience that exceeds our shoppers' desire for fresh, flavorful and uniquely prepared meals and snacks as well as a full selection of grocery staples."

In Chicago, Mariano's fills a void left when Safeway closed its Dominick's stores in the market in 2013. It also fills a void in Kroger's portfolio which operated only a handful of value-priced stores here.