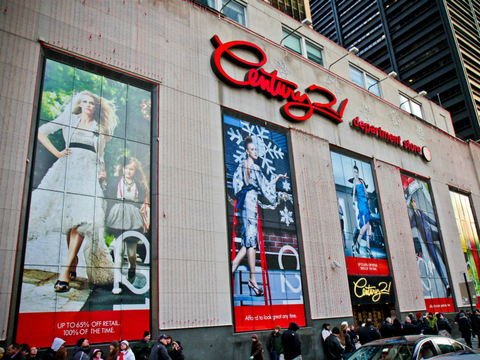 Century 21 is tackling the off-price channel, expanding beyond lower Manhattan and opening a 140,000-sq.-ft., four-level flagship in Brooklyn.

It's the most modern Century 21 to date, according to Women's Wear Daily. It features a range of designer products and brands across categories and includes electronics, footwear, accessories and cosmetics. There's also Brooklyn logo-ed product tailored to the neighborhood.

Sources said the store could do $40 million to $50 million in first-year sales, though Century 21 executives won’t comment on volume.

The Brooklyn store is the retailer's 11th location and the flagship expansion is being complemented by a series of pop-up shops, including one in Santa Monica, California this summer.

The pop-ups are helping the company gauge its brand reach. “It was interesting to see how many people knew Century 21,” Raymond Gindi, co-CEO told WWD. “It was an interesting way to test the market.”

So too, has the new Century 21 private label credit card. The first customer to apply was in Laredo, Texas.

This is prompting executives to consider new expansion opportunities outside of areas where shoppers are already familiar with the Century 21 name.

RELATED: Gordmans is a hit with millennials

“We have no official national strategy,” said Gindi. “We are opportunistic with product and always in the market looking for deals. It’s the same thing with real estate. We are a growing company and looking at major city locations. We believe in opportunistic growth.”