Apple's stores will soon be more than just stores 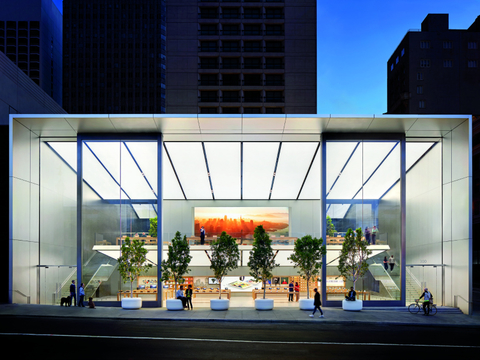 This spring, Apple unveiled the first of its newest locations that are set up to function more as community gathering places than temples of commerce.

It's an evolution that will continue under the leadership of Senior VP of Apple Retail, Angela Ahrendts.

New locations feature a gathering space dominated by a giant high-resolution screen, an interactive wall called "The Avenue" that brings new accessories to life, lots of green space and natural elements, and a new way to interact with Apple Genuises.

“The store is now the biggest product we produce and we have five new features [including iPads, iPhones, Watches, Macbooks and Apple TVs.]. Accessories are avenues, and the huge digital screen in each store is the forum,” said Ahrendts at Fortune's Most Powerful Women conference in Laguna Niguel, California.

Apple will redesign 95 stores by the end of this year, with the notion of community at its center, complete with town squares and educational programming that will include lessons for kids in how to code in Apple's programming language, Swift.

Ahrendts joined Apple in 2014 and this latest evolution of how the brand interacts with the public came from conversations with Apple CEO Tim Cook.