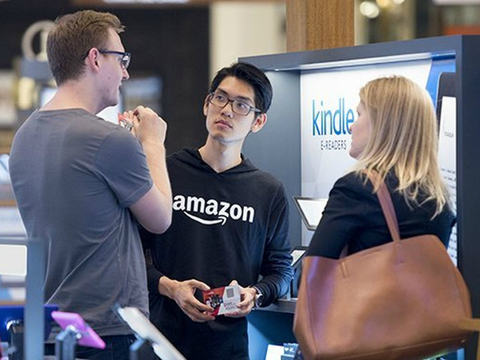 Amazon has been slowly opening bookstores, but now plans to speed things up in the coming months with pop-up shops devoted to electronics in shopping malls.

It's an aggressive expansion move for the company, with dozens of locations scheduled to come online in the next year, according to a source. The intent is to showcase Amazon's growing line of hardware, particularly the Echo Bluetooth speaker and Alexa, the voice-activated assistant.

Alexa responds to voice commands to select streaming media or order items on Amazon for Prime members. While Alexa is native to Amazon's own brands, the technology is being adopted by other device makers including LG and Sonos.

There could be more than 30 locations up and running by the holidays and 100 stores by the end of 2017, according to Business Insider. "We offer pop-up kiosks so that customers can try out all our new devices and learn about our services like Prime and unique content like Amazon Originals," Amazon said in a statement.

The initiative is now featured on Amazon's website and mentions the full range of Amazon devices – Echo, Fire TV, Fire Tablets, Dash Buttons and Kindles. Shoppers will be able to try out the hardware, get informed advice and select a range of accessories.

There are 21 pop-up locations listed on the website and two bookstores now open in Seattle and San Diego. Additional bookstores are scheduled to come online in Portland and Chicago.