Aldi's name is out there 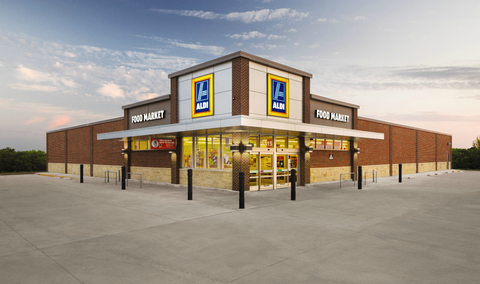 After five years in the U.S., Aldi's brand name is becoming well-known. (Aldi)

Although Kroger is the largest supermarket chain in the U.S. and has been around for many years, Aldi is quickly making a name for itself. The German supermarket chain is taking the U.S. by storm, and data from YouGov Profiles reveals that 61% of consumers don't think there's much a difference between generics and leading brands.

According to the report, Aldi's impression score (both positive and negative impression of a brand) is 29, almost double what it was in 2013. Kroger's impression has remained at about 30 throughout the same time period.

"Aldi’s business model fits well with the belief among a high percentage of U.S. consumers that there is not much difference between branded products and supermarket private label products," Ted Marzilli, CEO of data products at BrandIndex, told FierceRetail.

The scores are similar when it comes to satisfaction scores, which gauge how many consumers are satisfied or dissatisfied. Since January 2013, Aldi's score has gone from 15 to 26, and Kroger's score has stayed around 26 for the past five years.

When respondents were asked "Which of the following brands have you talked about with friends or family members" in the past two weeks, 19% said Aldi and 13% said Kroger.

The positive association with Aldi comes as no surprise as its success in the U.S. market has already been seen in several other studies. For example, in a 2017 Retail Feedback Group survey, the supermarket with the highest customer perception was Aldi, receiving strong marks for both value and checkout experience.

And in May, Aldi announced that its prices were 21% lower than its competitors, including rival Walmart.

"The trend line for Aldi does not appear to be showing any signs of slowing," Marzilli added. "It may not have all the answers to the future needs of shoppers, but focusing on their own brands sure seems to be working for now."