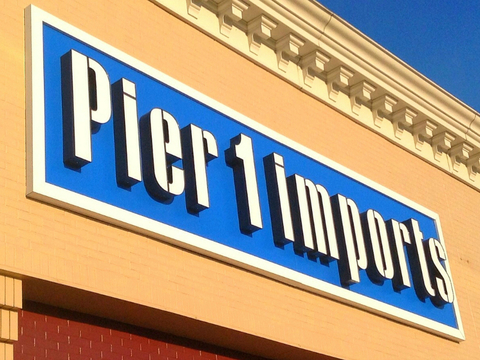 Pier 1 had a significant drop in same-store sales in the previous quarter. (Mike Mozart/CC BY 2.0)

Walmart India makes half of sales out of store

Walmart India is now getting almost half of its business through out-of-store sales channels including B2B e-commerce, associate-driven sales and call centers. Walmart was among the first retailers in India to adopt the omnichannel way of doing business. (Economic Times)

Walmart, Kroger and Amazon were named the top three retailers of the year, according to Stores Magazine's Top 100. Five years ago, Amazon was in 11th place, last year it was No. 7 and now it's made the top 5. (Stores)

Nike is making an effort to return to U.S. sales growth and announced a four-year, $15 billion share repurchase program. After a handful of sluggish quarters, revenue was up double digits in international markets in the last period, seeing the benefits of some new product launches. (CNBC)

Pier 1 reported a same-store sales decline of 8.2% in the latest quarter, exceeding the predicted drop of 7.7%. Executives are hoping that new products coming out in August will turn things around. (MarketWatch)