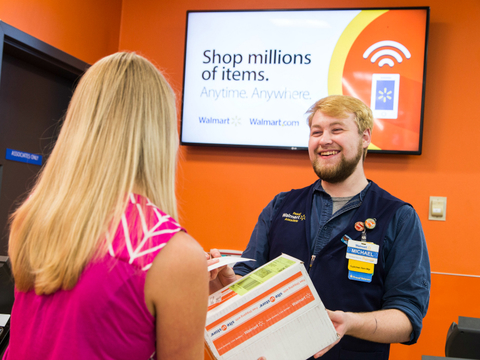 Walmart associates can earn quarterly bonuses based on the performance of their store.

Walmart is giving more than 850,000 Walmart associates in the U.S. a share of more than $157 million in cash bonuses, based on their stores' performance in Q4. The bonuses went out March 9 and more than 22,000 workers in Alabama received a total of $4 million in bonuses. The bonuses come on the heels of Walmart U.S. recording its strongest comp sales for the year, a 1.8% increase. (BusinessWire)

Gordmans files for bankruptcy, will liquidate

Century-old discount department store chain Gordmans has filed for bankruptcy with plans to liquidate its assets. The latest victim of the online shopping boom, vendors stopped supplying the retailer with goods in March as sales had plunged. The company is in debt of $131 million and has filed Chapter 11 in Nebraska federal court. (Bloomberg)

New data shows a direct correlation between customer spending in-store and the level of service they receive when shopping online. According to Salesfloor, for every $100 converted online by a sales associate, retailers were able to attribute up to $68 purchased in a brick-and-mortar location. These in-store purchases were linked to two key cases: a consumer connecting with an associate using Live Chat or a consumer received branded messages or product recommendations directly from an associate. (Marketwired)

Fairway Market named Abel Porter as its new CEO. Porter, a supermarket veteran who was a consultant to the company and also worked for Smith Food and Drug in Utah, will succeed Jack Murphy, who held the post for the past two and a half years. Fairway has 15 locations in the New York City area and emerged from bankruptcy in July. (New York Post)