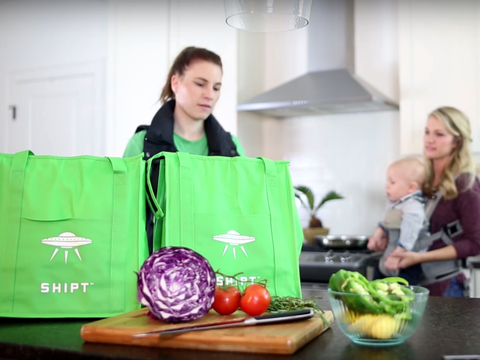 Costco plans to offer delivery to more than 30 million households in 50 markets by the end of the year.

Costco has announced a partnership with Shipt for home delivery. The service will launch in Tampa, Florida, with plans to expand delivery to 50 markets and more than 30 million households by the end of 2017. Shipt already works with grocery chains Whole Foods Market, H-E-B, Harris Teeter and, most recently, Meijer. (USA Today)

Online shopping down during snowstorms

Despite what one may think, e-commerce orders actually go down during snowstorms for several reasons. The first being that consumers tend to log into online shopping sites more often at work than at home. Second, winter storms cause power outages, making it more difficult to shop—and more likely for consumers to be out shoveling snow. (CNBC)

Aldi's parent company of its U.S. stores, Aldi Sud, is introducing a new corporate logo to complement its ongoing modernization. It's Aldi's first new design since 2006 and a big move following the announcement last month of a $1.6 billion remodeling program for U.S. stores. (Supermarket News)

Jeff Burt, the previous head of Kroger's Fred Meyer banner, has been hired by Target to take over its struggling grocery business. After 30 years at Kroger, Burt will report to Target's executive vice president and chief merchandising officer, Mark Tritton. Burt starts on April 10 and will relocate to Minneapolis. (Cincinnati.com)