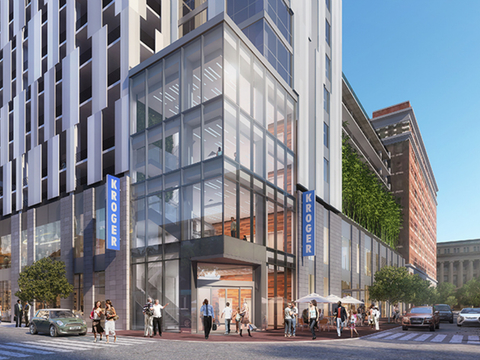 Kroger's urban-format store will be part of a new mixed-use project in Cincinnati. (GBBN Architects)

By 2019, Kroger will open the first urban grocery store in downtown Cincinnati in more than four decades. The second floor will have a food bar with prepared options and a terrace. (Cincinnati Business Courier)

Amazon’s lending business continues to pick up speed, as the e-commerce giant loaned more than $1 billion in the past year to merchants selling on its site. Launched in 2011, the service helps businesses that might otherwise have trouble getting loans at a bank. (Bloomberg)

Macy’s is considering adding grass to the rooftop of its iconic flagship store in Herald Square. The New York City location will be reconfigured and may include a garden as a way to activate the store’s upper levels. (TheStreet)