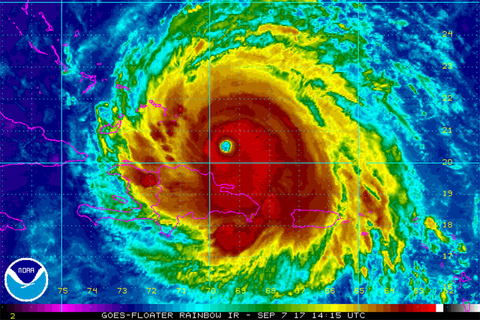 The U.S. braces for another hurricane.

Still reeling from the effects of Hurricane Harvey, the U.S. is preparing to be hit by another giant storm: Irma. As Florida, South Carolina and several islands brace for the impact, retailers need to prepare for the possible residual effects that could come for days and months following reopening and cleanup.

RELATED: Harvey to cost $1B in lost sales

According to Planalytics, the potential economic impact for lost sales is $1.4 billion due to the Category 5 storm's potential size and the number of people under threat.

"Hurricane Irma will be a disaster that shuts down spending in discretionary categories for the short term," Greg Portell, lead partner in the retail practice of A.T. Kearney, a global strategy and management consulting firm, told FierceRetail. "However, we’ll see an immediate lift in spending on emergency items and stockpiling of food and water. Most retailers and CPG's regularly use weather forecasting to pre-position inventory of items most likely to be purchased at times like these. The challenge will be how fast the inventories can be shifted so soon after having dealt with the impact of Harvey. Spending in discretionary categories will rebound strongly once recovery efforts swing into full speed and people begin to replace previous discretionary purchases lost in the storm. And again, we’ll see an unseasonal hike in those categories at that time."

How will the hurricanes ultimately impact fiscal 2017 retail sales overall?

"Hurricanes were not a factor at this time," said Jack Kleinhenz, chief economist at the National Retail Federation. "It's too soon to evaluate the impact they might have in retail spending. We will be watching closely on how the data will indicate their impact on the coming months."