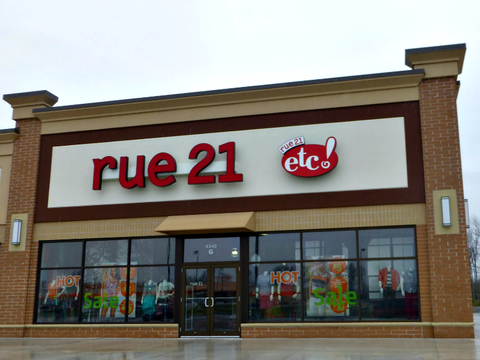 Rue21 is facing the challenges that other teen apparel retailers struggle with in 2017.

Teen specialty retailer Rue21 has filed for Chapter 11 bankruptcy protection. The retailer has entered into agreements with its lenders to help reduce debt and provide capital for restructuring.

During the process, Rue21 expects to continue business as normal.

Last month, the retailer began the process of closing 400 underperforming stores out of its 1,179 locations. Rue21 may consider additional store closings as it evaluates its real estate portfolio.

"These actions are being undertaken with the goal of strengthening the company's balance sheet, achieving a more efficient cost structure, and concentrating resources on a tighter retail footprint in order to pave the best path forward for Rue21," said Melanie Cox, CEO of Rue21. "Even in a challenging environment, we are fortunate that Rue21 has highly relevant brands, an enthusiastic and loyal customer base, and hundreds of highly performing stores. The agreement with our lenders represents their confidence in Rue21's future success even at a time of significant retail industry change. Looking ahead, I am confident that the outcome of this process will be a stronger and more sustainable Rue21 for our customers, vendors and business partners."

Rue21 is facing the challenges that other teen apparel retailers struggle with in 2017. According to Greg Portell, lead partner in the retail practice of A.T. Kearney, a global strategy and management consulting firm, most retailers rely on a planning process that, at best, is several months long. But teen trends move very quickly, making it hard for teen retailers to correctly match their supply with the consumer demand.

"The lack of agility is crippling in the teen segment, more so than any other area of retail," Portell told FierceRetail. "Trend spotting becomes even harder when the consumer data sets change quickly as the consumers age and the people making the merchandising decisions are naturally a bit disconnected from the target audience."

Compared to its competitors, Rue21 shoppers did not exhibit a lot of loyalty to the brand in the past year.

According to NPD Group’s Checkout Tracking, which analyzes consumer purchases at the receipt level, consumers who bought at least one item of apparel from Rue21 in the last year also shopped at a number of other retailers, the top ones being Walmart, Kohl’s, Target, JCPenney and Victoria’s Secret.  Indeed, they were more loyal to these retailers, giving about 17% of their apparel spend to Walmart, 8% to Kohl’s, 7% to Target, 4% to JCPenney and just under 4% to Victoria’s Secret.

However, these shoppers were more loyal to Rue 21 than to TJ Maxx, which received about 3% of their spend, Ross Dress for Less, another 3%, and Macy’s and Old Navy each receiving 2.5%.

Moving forward, if Rue21 is going to make it out of the red, it will need to keep an eye on costs that are not directly related to consumer demand. Portell says that overhead costs and poorly managed investments tend to create anchors that weigh on the retailers' ability to meet profit expectations. Furthermore, legacy processes and practices slow down their ability to react.

But Sean Maharaj, a director in the retail practice of AArete, a global consultancy specializing in data-informed performance improvement, thinks that it is too late for Rue21, which has reached the point of no return.

"I believe Rue21’s challenges have been festering for longer than initially thought," Maharaj told FierceRetail. "With the bankruptcy filing in process, we’re quickly learning just how serious this is for them. Their revenue/cost structure cannot support day-to-day operations, which for any business is a serious symptom of cash flow struggles—no surprise, given their extensive footprint and rapidly declining store traffic. And shuttering additional stores is something that has surfaced unexpectedly."

Instead, Rue21 should have been focusing on the quickly advancing world of e-commerce and redeployed its assets and resources towards online sales rather than reorganizing assets to maintain a long-term brick-and-mortar presence.