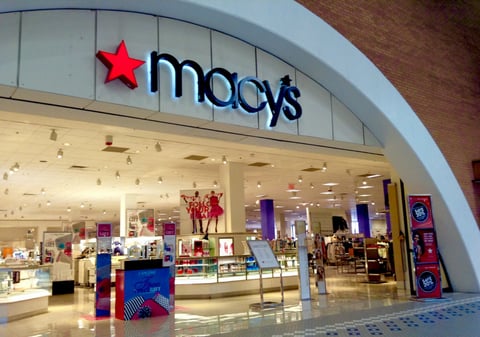 A Macy's merger runs the risk of cannibalizing Hudson Bay's own businesses and promotions. Credit: Macy's Mike Mozart / CC BY 2.0

Macy's apparel shoppers are loyal, giving 16% of all their apparel share to the department store chain. By contrast, these same shoppers give just 1% of their fashion wallet to Lord & Taylor and even less to Saks Fifth Avenue, both brands of Hudson's Bay.

As Hudson's Bay continues to show interest in taking over Macy's, one question for the parent company will be how the two customer bases will overlap. Analysts at NPD Group used Checkout Tracking purchasing data to examine the similarities and difference among the items sold at Macy's and those sold at Lord & Taylor and Saks Fifth Avenue to identify the clear difference among their customers. Results suggest that a takeover might not only benefit Hudson's Bay in the way of real estate, but also be a way to win back apparel sales that it loses to Macy's.

"Looking at the numbers from our Checkout Tracking service, there is a great opportunity for Hudson’s Bay’s portfolio to mesh well with Macy's—there is not as much cross-shopping between the two as most would think. The biggest obstacle would be where they are in the same shopping centers/locations. But even many of those would find different customers and opportunities," Marshal Cohen, chief industry analyst of The NDP Group, told FierceRetail.

Looking at those customers who shop for apparel at Lord & Taylor, consumers give 11% of their overall apparel wallet spend to the luxury chain, but 62% of those same Lord & Taylor shoppers also give 10% of their wallet share to Macy's.

Looking at Saks, apparel shoppers are not quite as loyal, giving just 6% of all wallet share to the retailer. And a little more than half of Saks shoppers, 54% also give the same 6% of their wallet share to Macy's.

Cohen warns that the merger still runs the risk of cannibalizing Hudson Bay's own businesses and promotions by causing the other/sister store to compete with promotions.

"Also the tendency to try to create economies of scale and share resources would eliminate a variety of things, like private label programs, that are different," he added.

Still, overall, Cohen believes the merger could be a good thing. It would be a way to cleanse the department store channel because as it stands today, there are too many players in the industry that look and feel similar.

"This could help create a more defined group of department stores, letting them keep their personality and control the tendency to promote for no apparent reason, which causes price wars for the retailers that erode their margins. It can be good for the retailer, but will mean fewer sales/promotions for the consumer," he added.