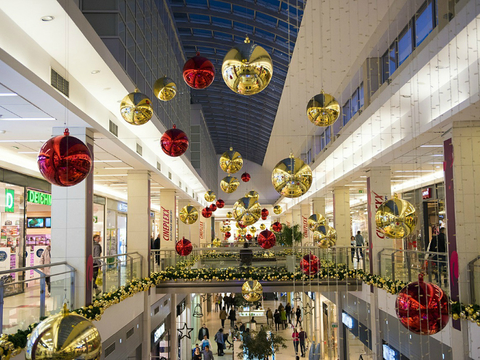 It seems the online sales, offline discounts, consumer confidence and winter weather all aligned to make for a stellar Black Friday 2017

The holiday shopping weekend, Thanksgiving through Cyber Monday, topped Forrester's originally estimated growth of 12% and landed somewhere upwards of 16% from last year, accounting for 14% of all holiday sales for 2017.

According to Sucharita Mulpuru-Kodali, vice president and principal analyst, Forrester, the weekend proved that consumer confidence is high and retailers have been aggressive with discounts.

Even brick-and-mortar, which experienced a year of extensive store closings, only reported a 1.6% decline in shopper traffic on Thanksgiving and Black Friday compared with 2016. Which, according to Brian Field, senior director of advisory services for ShopperTrak, proves that "physical retail is still highly relevant, and, when done right, profitable."

Both online and offline had a good stretch as even shopping mall traffic was high. According to the International Council of Shopping Centers (ICSC) Black Friday saw 105 million adults visiting malls and shopping centers across the country. Of all those visitors, 63% made a purchase and shoppers visited an average of six stores, compared to four last year.

In the way of weather, cold temperatures throughout most of the country helped put consumers in the holiday mindset and upped the purchases in seasonal categories, according to Planalytics. Macy's CEO Jeff Gennette was pleased at the cold weather in the Northeast, which put the retailer on track to sell more than 1 million coats and sweaters by the end of the weekend.

“Thanksgiving Weekend is a great indicator for what will be a holiday season full of spending, as we are seeing a very positive consumer sentiment and willingness to spend,” said Tom McGee, president and CEO of ICSC. “Shopping centers across the country should feel very optimistic about the season ahead. While the shopping season is longer this year, it’s not coming at the expense of the most popular shopping day of the year.”

So what days and times saw the most shopping action?

But despite the strides made it mobile, it seems desktop was still a clear winner in 2017. For online purchases, Monetate found that AOVs for desktop were the highest of any channel at $173.92 on Thanksgiving—a 5% increase from 2016.

"One point to note is that all the data points around mobile transactions suggest that mobile shopping growth may be peaking," Mulpuru-Kodali said. "About one-third of transactions are happening on mobile devices including tablets and that is about the same number as last year. Hopefully retailers haven’t forgotten the importance of the desktop experience which still matters for a lot of shoppers and has higher conversion rates in general."

And the holiday hype, along with the positive moods, resulted in the sell through of many retailers' inventory. For example, retail analytics company Edited noted there was a 102% increase in product sell-outs for fashion companies. Perhaps due in large part to the deep discounting done, as 48% of U.S. online apparel was discounted over the weekend. But it seemed the move was intentional.

“2017 has been a tumultuous year for the retail sector, characterized by record-breaking brick and mortar retail bankruptcies and store closures on the one hand, and skyrocketing e-commerce sales on the other,” said Katie Smith, retail analysis and insights director at Edited. “While the retail industry has banked on aggressive discounts weeks before Black Friday and Cyber Monday to boost consumer spending, they need to make sure that this does not sacrifice margins in the long-term.”

Following Cyber Monday, retailers now face the challenge of having to ship all of these orders in the time promised to consumers.

RELATED: 10 days account for almost half of holiday traffic

"The holidays are a time for joy but irritated customers who don’t receive their packages on time are not so joyous. Fortunately, customers are doing mostly self-gifting now and they aren’t in a rush to receive packages by a specific date (for the most part) but if last year is any indication, many retailers will be working their warehouses at full capacity for days to come just to catch up to the backlog that has been created this weekend," Mulpuru-Kodali said.

Shopify supported that the shipping demands were vast, as the total estimated distance for all Black Friday packages to be shipped surpassed 5 billion miles, farther than Pluto is from Earth.