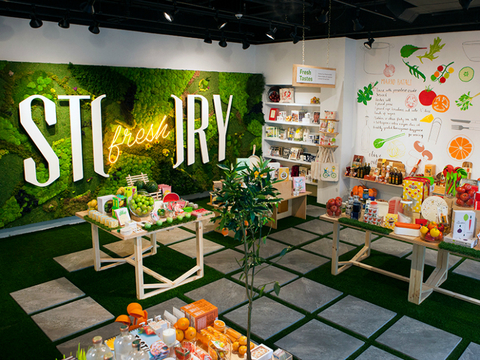 Although the percentage of online grocery purchases is still low, tech companies are scrambling to get ahead of the trend. (Story)

Walmart’s Jet.com opened its first temporary physical store in Manhattan this week. In partnership with concept-based retailer Story, the location aims to combine the best of brick-and-mortar with the technology of an online retailer.

But unlike Amazon, which has quickly expanded its physical presence in 2017 with the opening of several brick-and-mortar bookstores and the test of an AmazonFresh grocery store, Jet does not plan to open up any other physical locations.

Stephan Schambach, e-commerce pioneer and founder of NewStore, a mobile retail platform with end-to-end solutions for consumers, said that the goal of Jet's collaboration with Story is to introduce its online grocery service to urban areas.

"Walmart is well known outside of urban centers, but Jet and Jet Fresh are more focused on grocery delivery within cities," Schambach told FierceRetail. "This experiment puts a stake in the ground and shows that Jet is doing all it can to win in the grocery space, which Amazon has been working on for years but is yet to gain a foothold in. It’s another notch in the Walmart belt."

Jet began testing grocery delivery in the New York market last year. While the retailer claims at the moment that it will not be opening any more physical stores, Schambach is sure that the e-commerce site will do what's necessary to stay in the e-grocery game—whether that means stores for shopping or for in-store pickup.

But will the entity be able to compete with Amazon?

At the moment, Schambach says Jet is working with Walmart's resources, enabling it to quickly figure out what works and scale its approach as needed. Walmart is a native in the grocery business and can pull from those learnings and adapt them to urban areas.

While Amazon has more history in the grocery delivery space, it has been slow to make a big dent in the urban grocery market—but it does have the massive resources that Jeff Bezos continues to put behind the company.

"I wouldn't count either out at this point," Schambach said.

Although the percentage of online grocery purchases is still low, tech companies are scrambling to get ahead of the trend.

"It’s early to tell how this will all shake out, but the one good thing that is clear is that consumers will win. This sort of competition will drive prices down and increase selection, which always benefits consumers. While the industry is watching the outcome of this battle, everyone else will be enjoying the most easily accessible groceries in history," Schambach said.