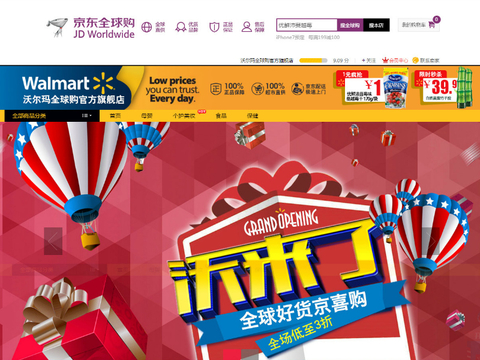 Singles Day is fast approaching and retailers are getting ready for one of the world's biggest shopping days.

Walmart is working with its online partner in China, JD.com, and is launching several new joint initiatives in advance of the day.

A Sam's Club flagship store on JD.com will debut on Oct. 21. Walmart will also stock Sam’s Club merchandise in JD’s warehouses to support its growing network of brick-and-mortar stores; up to 20 more locations are planned through 2019.

There is also a new Walmart Global Imports store on JD Worldwide, a cross-border platform that Walmart plans to expand, adding new categories of products as it connects more items from its assortment in other markets to China, which JD’s last-mile logistics network will deliver to customers through its speedy home delivery service, according to the company.

Finally, Walmart and JD will offer two-hour delivery in select cities through a joint venture with New Dada, which launched today, Oct. 20.

The service will provide two-hour delivery from more than 20 Walmart stores. The number of stores is expected to double by the end of the year.

Like Black Friday, Single's Day is a retail invention. It's attributed to Alibaba, which promoted the day – 11-11 – as one for single people in China to buy themselves a little something. Currently, Singles Day sales outpace Cyber Monday as the most shopped day of the year.

Last year Alibaba reportedly took in $14.3 billion on Singles Day and added an in-store component. More than 1,000 retail brands with 180,000 stores in 330 cities across China participated, with more than 8,000 stores taking part in Beijing alone.

RELATED: Singles Day fails to catch on in the US

Singles Day has not caught on in the United States, although online marketplace Dealmoon boasts 5 million Chinese-American customers and will host Singles Day promotions both online and at brick-and-mortar stores with the addition of deals designed to drive in-store visits.

"Some of our U.S. retailers sold over $1M worth of merchandise on Singles Day last year," said Dealmoon's co-founder Jennifer Wang. "Many of our high-end luxury beauty and skincare merchants even exceeded the sales expectations they had had for Black Friday, and others sold out entire inventories. In 2013, we signed up 30 U.S. retailers; in 2014, 120; and 2015, more than 180. This year, we expect 300."