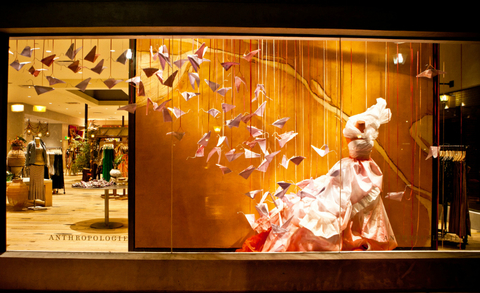 A lingering challenge is the apparel and accessory offerings by the Anthropologie brand.

Urban Outfitters' sales for the end of 2016 increased by 2% to $1.03 billion, CFO Frank Conforti said during a Q4 sales call with investors. Comparable sales were flat and the wholesale segment dipped 1%. He reported that direct-to-consumer channels continued to outperform brick-and-mortar, posting double-digit sales increases driven by increases in sessions and conversation rate.

The company is treading lightly on expansion in the U.S.

"As existing leases come up for renewal, we will review each location for brand appropriateness and with strong financial discipline where the location economics or demographic do not meet our strict criteria we will continue to close those existing stores. We believe North America remains over-stored and we believe we are fortunate to remain disciplined in our store growth throughout the years," said Conforti.  Instead, the company will look for growth internationally such as in Europe and Asia.

"Retail square feet per capita in the United States is more than six times that of Europe or Japan. And this doesn't count digital commerce," said Richard Hayne, CEO. "Our industry, not unlike the housing industry, saw too much square footage capacity added in the 90's and early 2000's. Thousands of new doors opened and rents soared; this created a bubble, and like housing, that bubble has now burst. We are seeing the results; doors shuttering and rents retreating."

As this trend will continue for the foreseeable future, digital will remain the brand's highest priority. Over the course of 2017, the company will complete a single platform rollout to all brands, make improvements to site functionality and invest more in data analytics to offer more personalized customer experiences.

Hayne called the company's holiday season "disappointing and highly unusual." Although all three brands enjoyed a double-digit comp sales on Black Friday and Cyber Monday, demand dwindled for several weeks in early December. Demand was normal during Christmas and Hanukkah and then dipped again.

"I can't recall having ever seen a quarter with such wild and wide fluctuations," he added. What went wrong? Hayne cited a mix of perhaps the wrong merchandise going into the new year. He said that post-holiday sales were no longer in demand from consumers. Instead, shoppers were looking for fresher options. Plus, a lingering challenge is the apparel and accessory offerings by the Anthropologie brand. In fact, Hayne called the current offerings "off pitch" and no longer resonating with the customer.

As a result, the company is addressing the issue by changing up the North American design and merchant teams. Urban Outfitters has hired a new president of women for the Anthropologie Group and a number of new merchandise managers and design directors have joined the women's apparel team to "fix the fashion issue."

Hayne did tout the success of the rate at which Urban Outfitters' brands are connecting with consumers on social media. Currently, Urban has almost 7 million Instagram followers, a 52% increase versus last year.

"I certainly don’t want to give the impression that we are abandoning the store channel because we’re not. I envision our brick-and-mortar store fleet as an equal partner with the virtual store in the new omnichannel retail world. We will continue to invest in this channel, but relative to historic levels, store investment is trending downward," Hayne added.