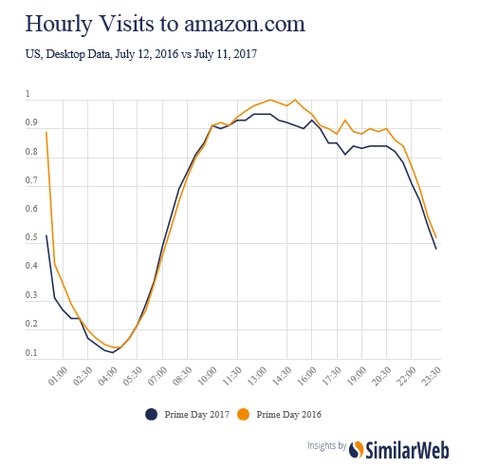 Amazon experienced increased traffic but not conversions versus Prime Day 2016

True, the volume of traffic was higher than an average June day for every hour of June 11. In fact, volume was 101% higher than an average June day, according to data from Similar Web. Traffic began at midnight Eastern Time but then dropped to relatively quiet during the night. It picked up again around 5:30 a.m. Eastern Time and stayed high all morning, peaking early afternoon.

The boost came from both direct logging onto Amazon, up 76%, and from referrals, up 92%.

And while, the average conversion rate for Prime Day visitors was 11.4%, 3 percentage points higher than an average day in June, the conversion rate was down from 14.5% in 2016—one in seven visits resulting in a purchase.

Dr. Stephen Kraus, chief of insights at SimilarWeb, says that the results are not uncommon—as sites expand into new audiences, these new members are often less enthusiastic.

"The hardcore Prime enthusiast has always been into Amazon Prime and Prime Day—but as Prime ownership grows beyond that enthusiastic core of early adopters, and events like this also draw non-Prime members seeking to check things out, it makes sense that conversion rates dip slightly. Perhaps there was also a novelty factor to last year’s Prime Day which wasn’t present this year," Kraus told FierceRetail.

Still, Kraus says that Prime Day was a huge win for Amazon as traffic and conversion was still higher than other Amazon days. Plus, he considers it a good metric of awareness and interest that a larger number of members were seemingly waiting until midnight on July 10 in order to jump on the sales as soon as they became available.

Looking ahead, in the bigger picture, Kraus thinks that Prime Day will likely fuel more attempts at building “retail holidays."

"There is something of an open question as to whether retail holidays such as this actually expand purchasing (grow the pie), or simply concentrate purchases that would have been made anyway into a single day," he said. "But even that concentration itself can be helpful to businesses."

Plus, Kraus says that more retail holidays like this in the summer could really become as asset for retailers, who often are in the red until the peak season surrounding Black Friday. Companies are motivated to find other times of the year, especially summer, when they can compete with travel for consumer dollars, especially as shoppers trends toward experiences versus things.