Half of Prime members make at least one weekly purchase 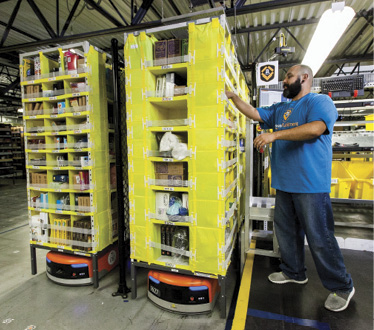 Amazon Prime shoppers make purchases at least once a week.

Prime members are definitely Amazon's most loyal and frequent shoppers, as 85% browse the site at least once a week and 45% make a purchase that often.

According to Feedvisor's new Amazon User study, 75% of shoppers often or always check Amazon prices before purchasing a product from another brand or site. Only 2% of those surveyed said they do not find Amazon helpful at all.

In addition, mobile shopping is on the rise, as 47% of customers shop via this device, up from 41% in 2016. Still, desktops garner 51% of all Amazon purchases.

Product reviews and descriptions also make a deep impact on consumer decisions. More than 95% of Amazon users always or sometimes read full product descriptions before purchasing. In fact, 90% of Amazon shoppers said they would not even consider purchasing a product with less than a three-star rating from other consumers.

RELATED: 54% of purchases now on marketplaces

In addition, Amazon's Whole Foods acquisition is changing the way its customers shop. As many as 22% of Amazon users are now more likely to purchase their groceries via the giant marketplace because of the acquisition, and 37% will consider it.

According to Claudia Hoeffner, VP of global marketing at Feedvisor, it was no surprise that Amazon was a huge shopping destination for many consumers. But she did find it interesting to see how the "Amazon effect" extends to seller reputations and reviews, which have long been pillars of Amazon’s marketplace.

"As Amazon’s third-party marketplace grows, consumers expect more from sellers," she told FierceRetail. "Close to 90% of Amazon customers won’t purchase a product that has less than 3 stars, and 79% check the ratings of third-party sellers before deciding to purchase products. This trickles down to the rest of the e-commerce industry, as consumers have grown more savvy and demand more from the companies they purchase from."

Moving forward, Hoeffner believes Amazon will continue to reshape consumer expectations for shipping speed and price. As more consumers become Prime members and receive their packages affordably in two days or less, they’re expecting the same offerings from other brands.

Plus, Amazon is also transforming how consumers shop online for groceries.

"Amazon’s recent success with Whole Foods supports the proliferation of online grocery," she said. "As Amazon continues to invest in online grocery capabilities and more consumers become comfortable with purchasing groceries online, it’s possible Amazon will be the catalyst of widespread consumer adoption of this emerging space."