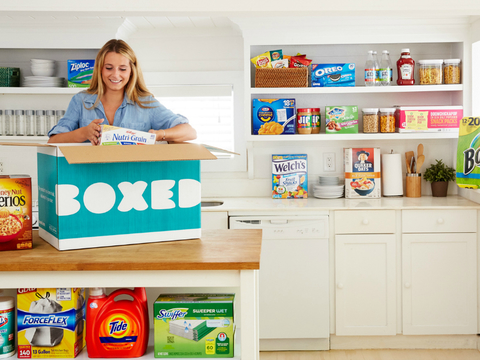 DALLAS – Although Boxed Wholesale has raised more than $150 million in outside funding since its founding less than three years ago, the New York-based startup has no plans to sell itself anytime soon, according to its chief executive.

“The short answer is, we’re not going to sell,” said Chieh Huang, who began the bulk grocery business online in his garage in suburban New Jersey in August 2013, and has run it ever since.

Boxed in May announced that it had added American Express Ventures to its investor stable, after unveiling a third round of investment in January worth $100 million.

But Huang did not rule out a possible public stock sale down the road when responding to an audience member’s question during a presentation at the National Retail Federation’s Digital Summit in Dallas last week.

The company now has fulfillment locations nationwide, which handle orders for large containers of products, such as 96-pack bundles of granola bars.

“We sold 38,000 bags of Cheez-It snack crackers in one day,” Huang said. “We’re not chasing Amazon or Walmart. We’re building our company for profitable growth.”

RELATED: Boxed is thinking outside the box and creating the perfect package for mobile retail

Since John Geisse pioneered the warehouse club concept in 1982, a bedrock principle has been to use the mark-up on goods to offset costs, and turn a two-percent profit from membership fees. 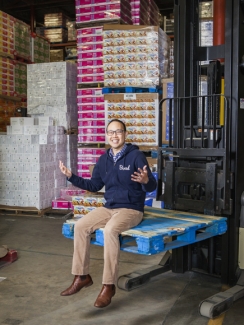 Boxed does not charge a membership fee. Because its average order is 9.8 items and brings in between $100 and $450 in revenue, the company can spread out its shipping costs over large orders, Huang said.

“We have abnormally large carts,” he said.

Boxed uses ground shipping from outside firms for its orders, most of which arrive in two to three business days. As the company’s order flow grows, it may consider using delivery vehicles of its own.

But Huang suggested the firm will think long and hard before jumping into that aspect of fulfillment. “Running your own fleet of trucks is not an easy thing to do,” he said.

Similarly, Boxed could eventually venture outside the United States, but the company will be deliberate before pulling the trigger on international expansion.

Of the top five locations for Costco Wholesale, two are located in Asia, Huang said. “So this can translate to other countries.”

But even countries with seemingly similar cultures and business climates can have their perils, he added. “Most retailers have thought Canada is America’s hat,” he said. “They’ve gotten their (heads) handed to them for that.”

Although Boxed is trying to carve a piece out of the $200 billion warehouse-club market, it is essentially a technology company and has built many of the technical systems it uses in-house.

Because it offers only around 1,200 items, it is able to handle areas of its business, such as fulfillment, differently than other retailers do.

Rather than building horizontally, Boxed’s fulfillment centers emphasize the vertical with three-story product racks that are 40 ft. tall.

So Boxed uses three-dimensional printing to custom-build delivery boxes that are the smallest mathematically possible and still contain all of a customer’s order.

Every customer’s delivery includes a handwritten note from the Boxed employee who put the package together. Parents who order diapers for newborns might find something saying, “Say hi to the baby for us.”

Sometimes, however, the creativity of Huang’s note-writers can get away from them.

One Boxed customer had a 40-pack order of Trojan condoms sent to a college campus, Huang said. The company later received a complaint from the client about the note that was included in the delivery: “Everybody loves an optimist.”